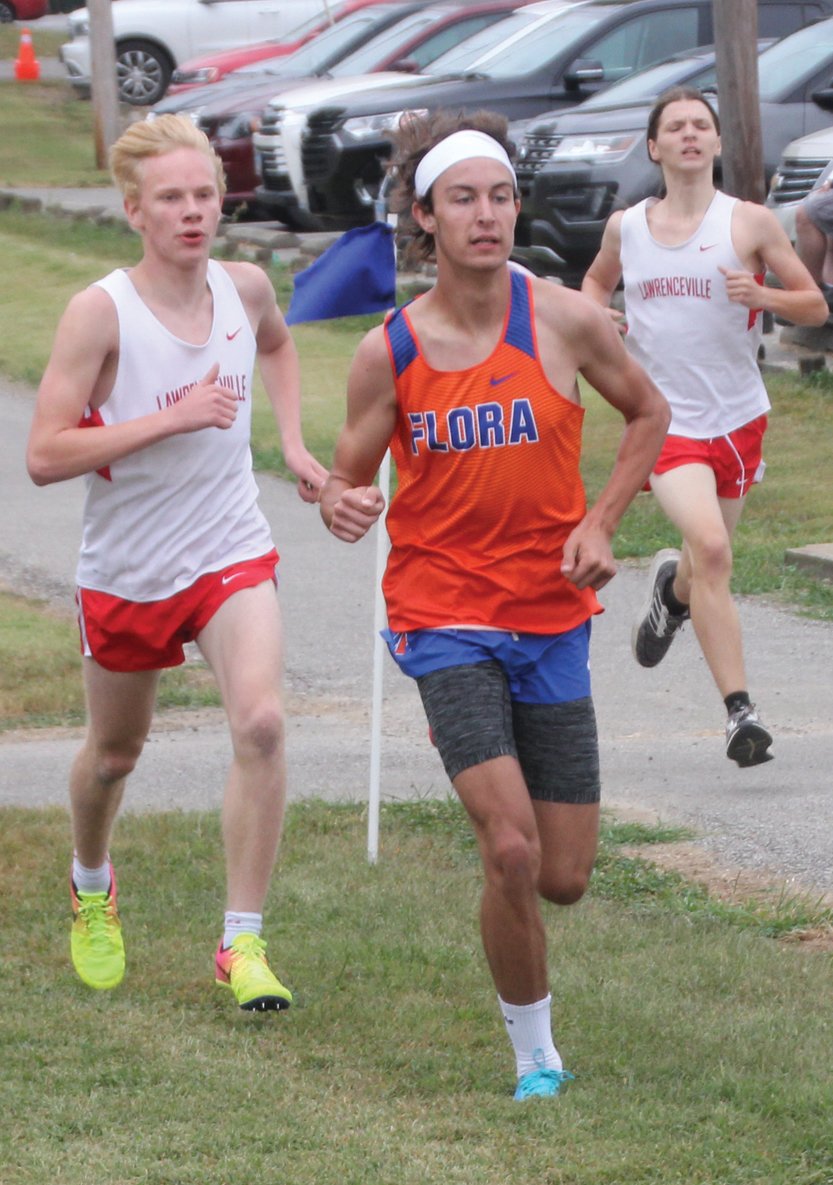 Lawrence County's Brayden Green (left) and Seth Seitzinger (right) run at the front of the field along with Flora's Isaac Stanford during Saturday's cross country race at Lawrenceville City Park. Green wound up second in the race behind Stanford, while Seitzinger ended up fourth. Josh Brown | Daily Record

OLNEY –– Neither team was at full strength for their season opener, but those who did run for Lawrence County’s high school cross country team did fairly well.

The Lawrenceville-Red Hill co-op was not able to score as a team in either race at Olney Tuesday (Sept. 1), as each team had just three runners compete. However, the ones that did run ran well.

“We had only three boys and three girls running, but we were really pleased with the results,” co-head coach Bill Bandy said. “They all had great runs for the first meet of the season.”

Leading the way for Lawrence County was Brayden Green, who finished second in the boys’ race with a time of 15:53. Meanwhile, Seth Seitzinger finished 13th in 17:22 and Reece Ralston was 14th in the 37-runner field with a time of 17:35.

In the girls’ race, top finisher for Lawrence County was Melina Loudermilk, who was fourth in 21:26. Right behind her was Ophelia Klein in fifth with a time of 21:48, while Kyra Griesemer finished 11th out of 18 runners with a time of 23:01.

Teutopolis was the only school to have a full girls’ team, so they won the meet by default.

“Brayden Green had an excellent race and might have won it if he hadn’t encountered a bad side stitch in the second mile.” Bandy said. “He fought through it and still finished second. Our three freshman (Ralston, Griesemer, Loudermilk) had great first races. In spite of not having full teams, our runners beat 50 to 60 percent of the competitors.”

The Lawrenceville-Red Hill Coop ran in a 7 team meet at Robinson this afternoon (course 2.96 Miles). The results are as follows;

The girls competed very well on a hot day. All three finished in the top 25% of the field.

The boys team has definitely improved in the last week. The time spread of our top 5 shrunk by over a minute.

The fields were slow in both races, probably due to the terrain and the heat.

DIETERICH – Individual success is the focus right now for Lawrence County’s high school cross country teams and they are getting their fair share of it so far this season.

The runners in the Lawrenceville-Red Hill co-op do not have enough runners to post team scores, but they continue to perform well on an individual basis.

“Our runners did a great job,” co-head coach Bill Bandy said after a recent meet at Dieterich. “The course was approximately 2.76 miles in length. It was also quite warm, with temperatures in the upper 80s, which was a bit intimidating. However, the team rose to the challenge.”

In the boys’ race at Dieterich Tuesday, Lawrence County took three of the top four spots, including Brayden Green, who won the race with a time of 16:40, which was more than a minute faster than the closest competitor. Reece Ralston came in third out of 14 runners at 18:18 and Seth Seitzinger was fourth at 18:41.

In the girls’ race, Lawrence County took three of the top five positions, led by Cara Eagleson, who won the race with a time of 21:27. Melina Loudermilk finished third out of 11 runners in 22:59, Kyra Griesemer was fifth with a time of 24:30 and Reese Tracy was 10th in 28:14.

“Brayden ran off with the boys race, winning by over a minute,” Bandy said. “Cara won the girls event by an even larger margin, her first victory in a cross country race. Both veterans ran smart tactical races in the heat. Dieterich had the numbers, but we had the front runners and beat most of their team.”

Lawrence County then ran in a multi-team meet at Olney Saturday, where the girls had enough runners to post a team score for the first time this season.

“Our girls were able to field a complete team for the first time and all nine of our runners competed,” Bandy said.

In the girls’ meet, the Lawrenceville-Red Hill co-op placed third with 58 points, while Olney won with 24 and Danville was second with 48. Mt. Carmel and Cerro Gordo both had runners, but not enough to post a team score.

Race winner was Olney’s Emily Nuttall with a time of 19:37.

In the boys’ race, Lawrence County had two of its four boys finish in the top-10, led by Green’s second-place effort with a time of 16:02.

Race winner was Olney’s Gavin Kirby with a time of 15:59.

Olney won the meet with 16 points, while Danville was second with 50 and Mt. Carmel third with 73. Cerro Gordo also ran, but again did not have enough runners to record a team score.

Lawrence County will return to Olney Saturday for the annual Olney Invitational at 11:45 a.m.

XC runners finish in middle of pack at Olney Invite

The highest individual finish by a runner from the Lawrenceville-Red Hill co-op was 20th, while the lowest was 75th in fields of 85 and 75 runners.

In the boys’ meet, Lawrence County had just four runners, so they could not factor in the team score.

LAWRENCEVILLE –– After being on the road during the early part of the schedule, Lawrence County’s high school cross country teams were able to get in a pair of home meets in recent days.

Lawrence County hosted Newton and Flora for their first home meet of the season Thursday (Sept. 24).

The girls’ team finished second with 38 points behind Newton’s 19, while team scores were not kept in the boys’ race due to Newton being the only full team competing.

Race winner was Newton’s Rylea Borgic with a time of 20:55.

Race winner was Flora’s Isaac Stanford with a time of 16:33.

On Saturday, Lawrence County hosted what normally have been their annual invitational meet, but the number of participants was reduced due to the COVID-19 pandemic. Still, six teams were represented, although there were very few with complete teams.

Flora’s Isaac Stanford was the individual winner with a time of 17:16. Mt. Carmel won the team competition with a score of 22, while Dieterich was second with 34.

In the girls’ race, Klein was fourth out of 16 runners with a time of 23:31, while Eagleson was next in fifth with a time of 23:50. Tracy placed ninth in 24:44 and Griesemer was 11th in 25:33, while Loudermilk was unable to run due to injury, which prevented Lawrence County from posting a team score. Dieterich was the only school with a full team and won the team title bu default. Individual champion was Dieterich’s Adriana Gordon with a time of 22:4

PARIS –– Although neither could compete as a team, Lawrence County’s cross country runners fared well as individuals in a meet at Paris Wednesday.

In the boys’ race, Brayden Green scored the win to lead Lawrence County, as he finished first with a time of 18:51 to beat Flora’s Isaac Stanford – who Green finished second to in two meets last week – by two seconds. Seth Seitzinger came in third out of 14 runners with a time of 20:10, Reece Ralston finished seventh in 21:10 and Alex Helderman was 10th in 22:14.

In the girls’ race, Ophelia Klein was the top finisher for Lawrence County in third place out of eight runners with a time of 24:25, while Cara Eagleson was fourth in 24:49.

Also for Lawrence County, Reese Tracy came in sixth in 26:15 and Kyra Griesemer was eighth in 26:41.